Antennas are effectively transducers converting the electrical energy into electromagnetic waveforms between sending and receiving devices.

While there are variations such as folded antennas, the basis of antenna design is a core conductor (referred to as a radiator) of Â½ electrical wavelength in size. AC voltage and current is then applied to the conductor to create a resonant circuit to a given frequency (ie capacitive and inductive reactance equaling zero). At frequency resonance, only pure resistance is left, a function of Ohmic and radiation resistance.
As Ohmic resistance creates heat energy losses, efficient antenna design optimizes radiation resistance in generating the waveform. The resultant waveform is a composite of a magnetic field and electrical field which are 90 degrees out of phase. Of practical importance in communications, antenna polarization reflects the direction of the electric field relative to the Earthâ€™s surface and the antennaâ€™s physical construction/ orientation. Antenna polarization within a system should be the same for reliable communications. 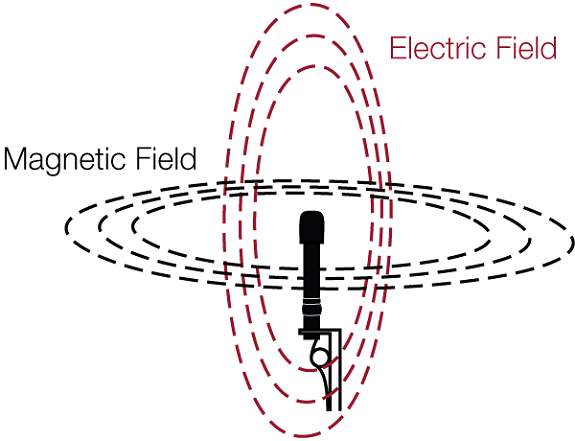 Illustrated above, polarization is the orientation of the antenna, the electric field and Earthâ€™s surface. A mismatch in polarization introduces severe communication losses into a system.
As antennas are designed and manufactured to a given frequency or to operate within a band of frequencies, matching antenna specifications to the frequency of the system is pivotal to reliable communications. While a mismatch of antenna to system frequency may still allow some absorption of the waveform, its relative efficiency and reliability are greatly reduced. Different types of antenna technology are discussed subsequently.

The basis of antenna design and gain is the theoretical isotropic antenna which radiates in a three dimensional spherical pattern (see below).

The isotropic antenna is a theoretical construct only as the radiation pattern becomes distorted in certain directions in physically realisable antennas. 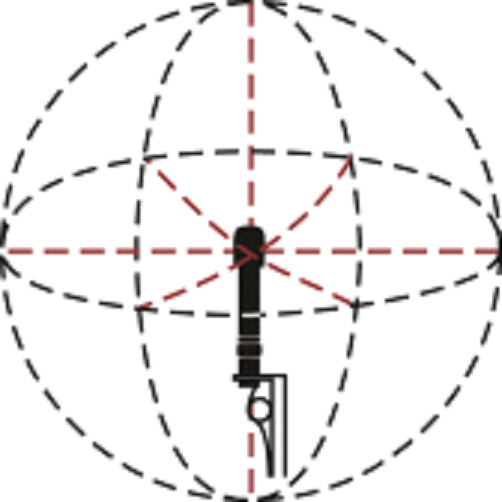 Dipole antennas are manufactured with an active conductor (referred to as a radiator) equal to Â½ the wavelength of the design frequency. The effect of the 1/2 wavelength design is to distort the RF power envelope direction to the horizontal plane (ie there is more power radiated to the sides than up and down).

The directed radial envelope is commonly referred to as the antennaâ€™s gain which compensates for losses created in the coaxial cable and connectors. Antenna gain may be expressed as either dBi or dBd and can be confusing as manufacturers do not always specify which metric is referenced.
When antenna gains are expressed as a comparison to the transmitter (TX) power/ isotropic antenna, they are referenced in dBi. Conversely, if the antenna gain is referencing a dipole antenna, it is referenced to dBd. The directed gain of a dipole antenna + 2.14 dB indicates there is an increased horizontal gain of 2.14dB (with consequent vertical loss), relative to power from the transmitter (TX power)/ isotropic antenna. Establishing the reference point as either dBi or dBd is of practical importance in system design given the increased reach of the dipole antenna relative to a reference isotropic antenna.
Irrespective of reference point, for effective communications reach, a dipole should be mounted vertically at it has a positive gain in the horizontal plane given the orientation of the electric field relative to the Earthâ€™s surface.

As illustrated, the dipole antenna distorts the directed energy in the horizontal plane with consequent loss in the vertical plane (ie up and down).

As indicated, government regulations mandate the amount of radio power emitted from a wireless device in order to manage the spectrum. These bodies will reference the maximum transmitter power and overall gain relative to an isotropic antenna or gain relative to a dipole antenna.
Equivalent/ effective isotropically radiated power (EIRP) is a measure of overall gain (including coaxial and connector losses) referencing an isotropic antenna of equivalent signal strength, measured in dBi. As the isotropic antenna is a theoretical construct, a more practical measure is the effective radiated power or ERP. ERP also references overall gain (including coaxial cable and connector losses) relative to a half-wave dipole antenna and is measured in dB.
More generally gain may be expressed as:

Collinear Antennas and Polarization
By design, the horizontal radiation pattern can be extended further by connecting multiple dipole elements together.

These antennas are known as collinears and are normally manufactured with gains of 5dB, 8dB or 10dB. Like dipoles, collinear antennas are vertically polarized for effective communications.

As illustrated, the collinear antenna further distorts the directed energy in the horizontal plane improving reliable communications distances.
Dipole and collinear antennas are termed omnidirectional as they transmit in an approximate 360 degree horizontal radius. Typical uses for these types of antenna are where outlying units are scattered around a sizable arc radius and/or in inter-plant applications where reflected signals over short distances are received at various arcs to the original.

These types of antenna are referred to as Yagi antennas with the addition of more reflector elements adding forward gain but a more focused narrower beam width. These antennas are often used for long line of sight radio point to point applications and intra-plant applications.

Yagi antennas focus the waveform in a forward direction reducing lobes at the rear and sides of the antenna; typically used over longer distances in a point to point fashion. 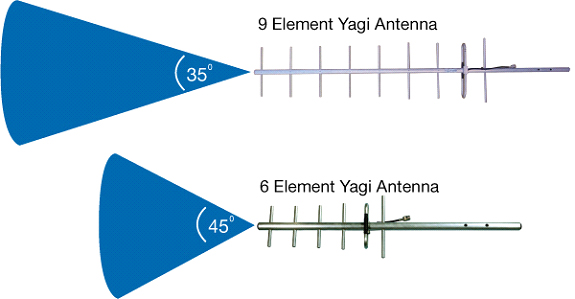 With increased forward gain Yagi antennas beam width becomes narrower.
Yagiâ€™s are mounted with the central beam horizontal and the orthogonal reflector elements either vertical or horizontal (relative to the Earthâ€™s surface). If the elements are vertical, the Yagi is transmitting with vertical polarization; if the elements are horizontal, the polarity is horizontal.

Polarization of a Yagi antenna will impact on the orientation of the propagated waveform.

Applications over shorter distances may necessitate the use of a Â¼ wave whip antenna. These antennas are simply a Â¼ wavelength conductor and can be mounted directly to the wireless device (typically ground-dependant antennas using the housing Earth to propagate). Another option is to have a small run of coaxial cable attached (ie ground-independent) for antenna placement flexibility. More generally Â¼ wave whip antennas range from unity gain to a loss of -2dB when combined with the coaxial cable.
Another antenna option used in higher frequencies such as 2.4GHz is the parabolic antenna. Parabolic antennas add side reflectors to amplify the forward gain even further (relative to a Yagi antenna) but with extremely narrow beam-widths. For 2.4GHz devices, parabolic reflectors behind the dipole element yield extremely high gains and extremely narrow transmission beams.

About the Author: webmaster