What is SCADA? A Complete History, Evolution and Function of SCADA

Home/Uncategorized/What is SCADA? A Complete History, Evolution and Function of SCADA
Like us on Connect with us on
Previous Next

What is SCADA? A Complete History, Evolution and Function of SCADA

Supervisory control and data acquisition (SCADA) is a system of software and hardware elements that allows industrial organizations to:

SCADA systems are crucial for industrial organizations since they help to maintain efficiency, process data for smarter decisions, and communicate system issues to help mitigate downtime.

The basic SCADA architecture begins with programmable logic controllers (PLCs) or remote terminal units (RTUs). PLCs and RTUs are microcomputers that communicate with an array of objects such as factory machines, HMIs, sensors, and end devices, and then route the information from those objects to computers with SCADA software. The SCADA software processes, distributes, and displays the data, helping operators and other employees analyze the data and make important decisions. 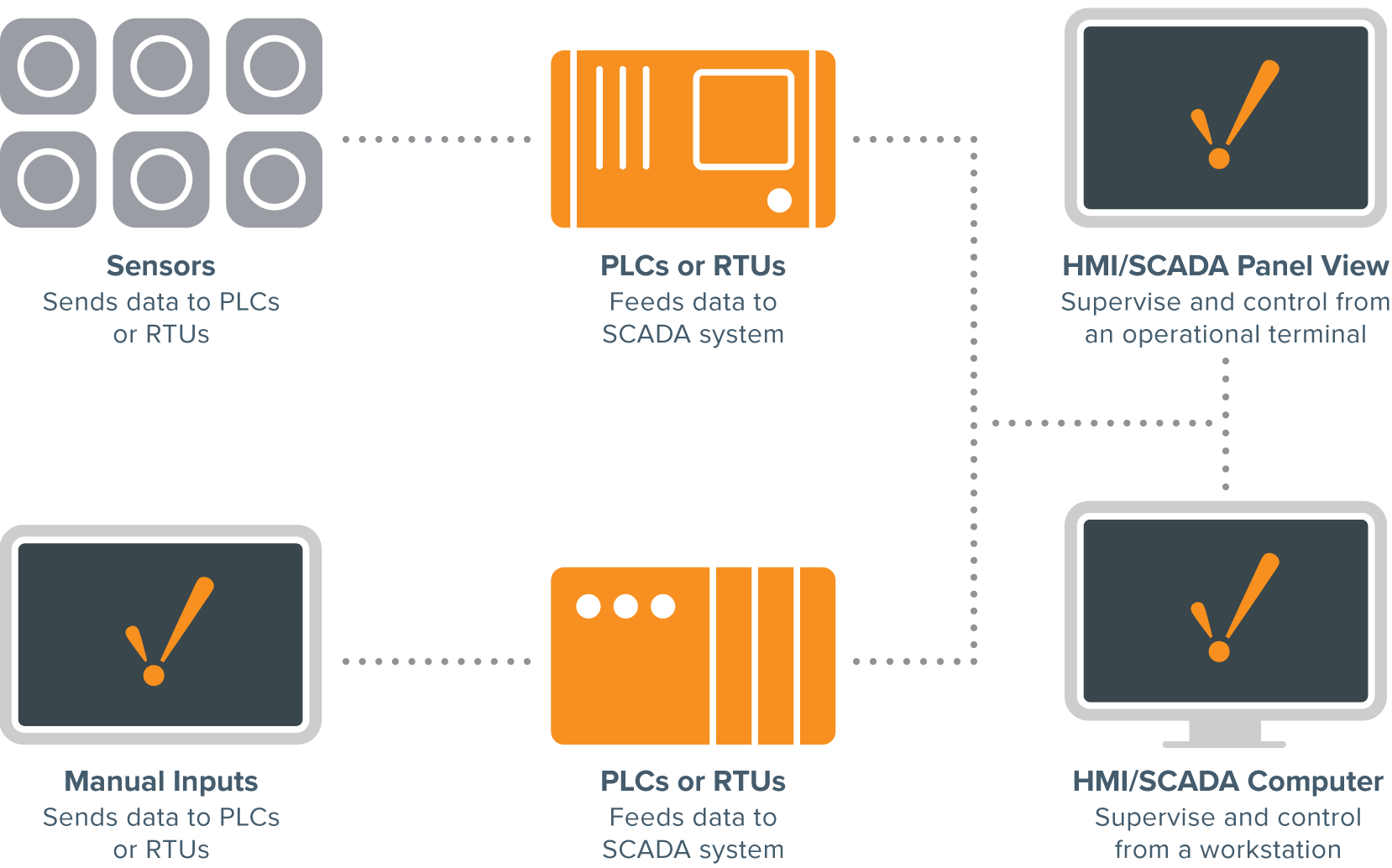 SCADA systems are used by industrial organizations and companies in the public and private sectors to control and maintain efficiency, distribute data for smarter decisions, and communicate system issues to help mitigate downtime. SCADA systems work well in many different types of enterprises because they can range from simple configurations to large, complex installations. SCADA systems are the backbone of many modern industries, including:

Virtually anywhere you look in today’s world, there is some type of SCADA system running behind the scenes: maintaining the refrigeration systems at the local supermarket, ensuring production and safety at a refinery, achieving quality standards at a waste water treatment plant, or even tracking your energy use at home, to give a few examples.

Effective SCADA systems can result in significant savings of time and money. Numerous case studies have been published highlighting the benefits and savings of using a modern SCADA software solution such as Ignition.

How Can SCADA Help You?

Applying a SCADA system in your facility can help decrease production waste and boost overall efficiency by providing useful production insights to operators and management. The information derived from a SCADA system can facilitate data-driven decisions and lead to increased output, reduced costs, and greater control of your processes.

Another benefit of SCADA is instant notification and automated response to system alarms. With the immediate knowledge of issues in the production process, operators and back-up systems are able to respond quicker to reduce equipment downtime and wasted product.

At Process Solutions, we have a team of certified SCADA engineers that work with our clients to develop custom systems to match any manufacturing environment. For more information about SCADA software, or to request a demonstration, please contact us below to discuss your requirements.

The core functions of SCADA include:

To perform these functions, SCADA integrates with sensors and other measuring devices, which can be in either digital or analog form, to collect data. The collected data is then sent toÂ  remote terminal unit (RTU) or programmable logic controller (PLC) to be translated to usable information. Finally, the information is relayed to a human machine interface (HMI) or other types of displays for operators to analyze and interact with.

SCADA systems also enable the ability to automate the control of industrial processes and machines that would otherwise be too complex for manual human control. Through the use of sensors and measuring devices, SCADA systems can detect abnormal parameters or alarms and automatically respond with a programmed control function. For example if an alarm occurred signaling to much pressure in a line, the SCADA system would trigger a programmed response to open a pressure relief valve to return pressure levels to a normal amount.

The Birth of SCADA

To understand the origins of SCADA, we must understand the problems industrial organizations are trying to solve. Before the concept of SCADA was introduced in the mid-20th century, many manufacturing floors, industrial plants, and remote sites relied on personnel to manually control and monitor equipment via push buttons and analog dials.

As industrial floors and remotes site began to scale out in size, solutions were needed to control equipment over long distances. Industrial organizations started to utilize relays and timers to provide some level of supervisory control without having to send people to remote locations to interact with each device.

While relays and timers solved many problems by providing limited automation functionality, more issues began to arise as organizations continued to scale out. Relays and timers were difficult to reconfigure, fault-find and the control panels took up racks upon racks of space. A more efficient and fully automated system of control and monitoring was needed.

In the early 1950s, computers were first developed and used for industrial control purposes. Supervisory control began to become popular among the major utilities, oil and gas pipelines, and other industrial markets at that time. In the 1960s, telemetry was established for monitoring, which allowed for automated communications to transmit measurements and other data from remotes sites to monitoring equipment. The term â€œSCADAâ€ was coined in the early 1970s, and the rise of microprocessors and PLCs during that decade increased enterprisesâ€™ ability to monitor and control automated processes more than ever before.

The Evolution of SCADA

The first iteration of SCADA started off with mainframe computers. Networks as we know them today were not available and each SCADA system stood on its own. These systems were what would now be referred to as monolithic SCADA systems.

In the 80s and 90s, SCADA continued to evolve thanks to smaller computer systems, Local Area Networking (LAN) technology, and PC-based HMI software. SCADA systems soon were able to be connected to other similar systems. Many of the LAN protocols used in these systems were proprietary, which gave vendors control of how to optimize data transfer. Unfortunately, these systems were incapable of communicating with systems from other vendors. These systems were called distributed SCADA systems.

In the 1990s and early 2000s, building upon the distributed system model, SCADA adopted an incremental change by embracing an open system architecture and communications protocols that were not vendor-specific. This iteration of SCADA, called a networked SCADA system, took advantage of communications technologies such as Ethernet. Networked SCADA systems allowed systems from other vendors to communicate with each other, alleviating the limitations imposed by older SCADA systems, and allowed organizations to connect more devices to the network.

While SCADA systems have undergone substantial evolutionary changes, many industrial organizations continued to struggle with industrial data access from the enterprise level. By the late 1990s to the early 2000s, a technological boom occurred and personal computing and IT technologies accelerated in development. Structured query language (SQL) databases became the standard for IT databases but were not adopted by SCADA developers. This resulted in a rift between the fields of controls and IT, and SCADA technology became antiquated over time.

Traditional SCADA systems still use proprietary technology to handle data. Whether it is a data historian, a data connector, or other means of data transfer, the solution is messy and incredibly expensive. Modern SCADA systems aim to solve this problem by leveraging the best of controls and IT technology.

Modern SCADA systems allow real-time data from the plant floor to be accessed from anywhere in the world. This access to real-time information allows governments, businesses, and individuals to make data-driven decisions about how to improve their processes. Without SCADA software, it would be extremely difficult if not impossible to gather sufficient data for consistently well-informed decisions.

Also, most modern SCADA designer applications have rapid application development (RAD) capabilities that allow users to design applications relatively easily, even if they don’t have extensive knowledge of software development.

The introduction of modern IT standards and practices such as SQL and web-based applications into SCADA software has greatly improved the efficiency, security, productivity, and reliability of SCADA systems.

SCADA software that utilizes the power of SQL databases provides huge advantages over antiquated SCADA software. One big advantage of using SQL databases with a SCADA system is that it makes it easier to integrate into existing MES and ERP systems, allowing data to flow seamlessly through an entire organization.

Historical data from a SCADA system can also be logged in a SQL database, which allows for easier data analysis through data trending.

ScadaPhone was designed to allow SCADA systems to have a highly configurable way of sending notifications and alarms directly form SCADA via Voice call, SMS and , Email.